There will be tons of automotive news next week as the Detroit Auto Show returns after 48 years. OK, so the pandemic and the show’s changing schedule only made it feel like 48 years, but January 2019 was still a long way off. As we wait for this flurry of headlines, let’s look back at the substantial week that has already been, particularly in regards to the electric car news that has broken out.

Jeep said Thursday was Day 4x as it revealed a lot of previously unknown information about its future electrification efforts. The biggest surprise was the extremely cool, all-electric Jeep Recon. Although it looks like a Wrangler, it’s definitely not a Wrangler replacement, and is indeed quite different for reasons other than its powertrain (independent front and rear suspensions, fully enclosed fenders, fixed roof). As the photos attest, though, you’ll be able to remove the doors and rear windows like a Wrangler. And again, it’s electric. Expect the Recon to be one of the most anticipated new vehicles over the next two years. Yes, years, plural. Production will begin in 2024 with bookings being accepted from early next year.

Then there was the Wagoneer S. Despite the name, it’s not a sportier Wagoneer variant or even an electric Wagoneer. In fact, the name is temporary according to chief designer Ralph Gilles. This sleek SUV, which certainly looks like Jeep’s attempt at a Range Rover Vilar (not a bad thing), will apparently have a 600-hp electric powertrain. It will also be produced in North America from 2024 with reservations starting early next year.

However, there will indeed be an electrified Wagoneer: the Grand Wagoneer 4xe PHEV. That’s good since the Grand Wagoneer gets pretty atrocious fuel economy. Details were light on specs, but we got a half-decent shot. Finally, the first of these electrified Jeeps to be launched will be the Avenger. Yes, Chrysler/Stellantis is dusting off an old Dodge name for a Jeep. This Dodge in question was not sold in Europe, however (good for them), which is important since the Jeep Avenger will only be sold across the pond. It’s mechanically based on the same platform as several French Stellantis EV SUVs, and only covers 249 miles on the much more generous European WLTP test cycle. These two elements probably explain why it will not be sold in the United States. Still, something to look for when visiting Belgium.

This stuff looks good, right? Like, really really good. There’s an argument that it looks better than the Ford Mustang Mach-E and GM didn’t have to call it Camaro to make it. No, it’s the Chevy Equinox EV, and despite the name, it has absolutely nothing to do with the blah crossover currently being sold. It will actually be a twin of the Honda Prologue. It will start arriving at dealerships in the fall of 2023 with all trim levels available at some point during the 2024 model year. It will be made in Mexico, just like the Mach-E.

We get our first real production VW ID reader. Buzz … that is, the all-electric next-generation VW bus. That’s only for Europe, though, as we’ll get a bigger, more minivan version for 2024. Lots of buzz about this one. Sorry.

Rivian has been hit harder than most by parts shortages, so good news and additional partnerships have been seen as good news for the start-up maker of really cool electric trucks and Amazon minivans. Rivian and Mercedes-Benz have announced that the two companies plan to collaborate on an electric van factory. The plant will be located in Europe at an existing Mercedes plant and will build next-generation vans from both automakers.

Although the Nissan Leaf is one of the few electric vehicles still eligible for the federal government’s $7,500 tax credit after the Cut Inflation Act was passed, Nissan is still analyzing how the new law will affect its future electric vehicle projects. This includes the upcoming Ariya, pictured below. 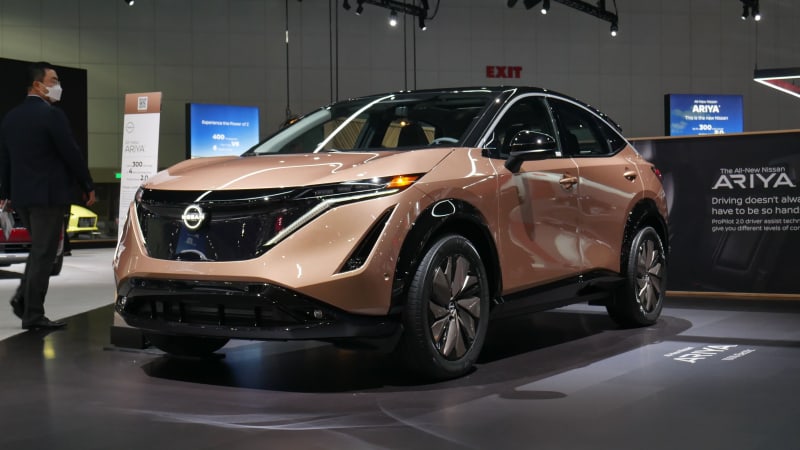